Artist Bernard Langlais said of his native Maine, “I feel a sense of oneness with the state.” Langlais forged his early career in Europe and New York City, but his rustic sensibilities, desire to work more immediately with his hands, and to work on a larger scale brought him back to Maine in the late 1960s.

The sculptures of Bernard (“Blackie”) Langlais ranged in size from tiny to massive. He was a prodigious worker who could not be contained by walls. His abstract and representational reliefs and freestanding constructions of lions, elephants, giraffes, bears, farm animals and athletes, spilled outdoors over eighty acres of farmland in Cushing, Maine. Although he painted for many years, Langlais became a self-taught sculptor whose exploration in wood began at a summer cottage in Maine he bought in 1956.  The cottage needed a complete overhaul, but Langlais was a carpenter’s son, and gladly set to work.  The discovery came when he had nothing left but scraps of lumber but had to finish a wall.  He pieced them together and was so pleased with the results that he built another, out of chips and shavings, in his New York loft. From walls and reliefs to freestanding sculpture was a small step, and his menagerie was begun. In the last eleven years of his life, he created a lively art environment on his property in Cushing, comprising more than 100 outdoor pieces.

Playing Bears was made in 1976-77, some of his most productive years.  This sculpture is one of several gifted by the Langlais Estate to the City of Portland through Colby College and the Kohler Foundation. 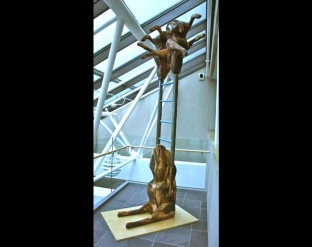 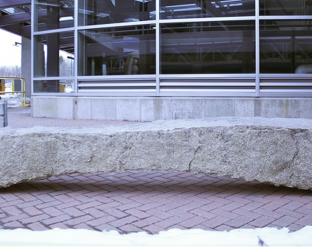