Our Lady of Victories is the most prominent piece of public art in Portland.  In late nineteenth century America, it became customary to erect civic monuments in memory of historic events and people, and in 1873, seven years after the devastation of Portland’s Great Fire, an association was formed under the leadership of Brevet Brigadier General John Marshall Brown to erect a monument in honor of the 5,000 lives the city lost to the Civil War, fully one-sixth of its population.  Located in Monument Square in the heart of downtown, Our Lady of Victories commemorates those Portland Civil War soldiers.

The sculpture commission was awarded to Franklin Simmons, one of the nineteenth century’s leading sculptors and a Maine native, who cast the sculpture in his studio in Italy.  Simmons had created Portland’s Longfellow Memorial a few years earlier.  The commission for the granite pedestal and smaller, bronze sculptures went to the distinguished New York architect, Richard Morris Hunt, who also designed the base for the Statue of Liberty.  The total cost of the statue was nearly $36,000, of which $20,000 went to Simmons.

The central figure, a fourteen-foot high bronze, female “Victory,” is a symbol of unity. She is modeled after Minerva, the goddess of both wisdom and war. “Victory” is holding a sword wrapped in a belt in her right hand and a shield and a branch of oak leaves, which are symbolic of victory, in her left hand.  She wears a crown of leaves and is dressed in classical garb.  She stands atop Hunt’s Doric-inspired pedestal of granite adorned on two sides by  groups of bronze figures, one representing the Army and the other the Navy.  On the north side three Army figures stand in front of six flags.  The general in the center is Brigadier General Francis L. Vinton of Fort Preble, Maine. The south side bronze grouping honoring Maine’s sailors shows three sailors standing in front of six flags.  In the center is Admiral David G. Farragut, who was a hero of the battles of New Orleans and Mobile Bay.  The base of the monument was fully installed by 1889 with the inscription “Portland, to her sons who died for the Union.”

The dedication of the statue on October 8th, 1891 was an emotional event, filled with great ceremony.  General Brown delivered the dedication speech and declared, “At last, a fitting monument on the fittest spot of the fairest city of our land.”

To this day, while the streetscape of Monument Square has changed tremendously, the monument itself remains the same, although the bronze has suffered mildly from the effects of oxidation.  In 1997 the City allocated $63,626 for the continued maintenance of the historic structure.  Each year on Memorial Day veterans, city leaders, and citizens gather to honor, not only those who have made the “supreme sacrifice,” but also “those who daring to make the ultimate sacrifice lived.”

Art in Our Front Yard Our Lady of Victories from Portland Public Art Committee on Vimeo. 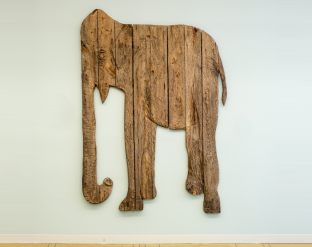 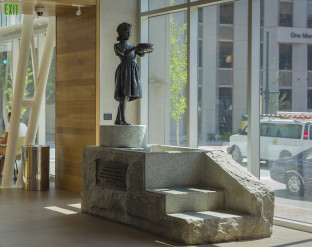 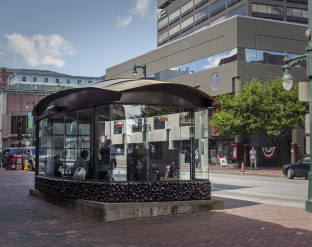