Sculptor Victor Kahill of Portland was commissioned to create the Maine Lobsterman with Maine’s participation in the 1939 New York World’s Fair, as a commemoration of Mainers who have dedicated their lives to fishing.  (Today there are 6,000 boats licensed to trap lobsters in Maine and in 2011 they landed 104 million pounds of lobster.)  It was the centerpiece of the Maine section of the Hall of States.

When the state failed to raise enough money for the completion of the statue, the artist painted the original plaster mold bronze rather than casting it in bronze, and it was this sculpture that was displayed at the World’s Fair.  Brought back to Maine after the fair, the bronze painted plaster statue was displayed first in the Columbia Hotel in Portland, and later in the rotunda of Portland City Hall until it was badly damaged by vandals.  It was then removed, partially restored and put on display in the Sea and Shore Fisheries Museum in Boothbay.

Shortly after Johnson’s death, the Maine Legislature appropriated money to cast three bronze copies of the Maine Lobsterman, that were placed on display in Augusta, Portland and Bailey’s Island.  Norman T. Therrien, a sculptor in his own right, cast the sculptures from the original plaster cast in 1975 at the Boothbay Foundry. In June 1983 the Bailey’s Island statue was moved to Washington DC and installed on Maine Avenue, overlooking the Potomac River.

When the Maine Lobsterman sculpture was initially unveiled, local lobstermen expressed disappointment that Johnson’s dog, Bruin, wasn’t incorporated into the sculpture as representative of all dogs who go lobstering with their human companions.  At the unveiling of the statue, Bruin was issued a bona fide lobster license by the Commissioner of Sea and Shore Fisheries.

The Maine Lobsterman epitomizes the spirit of the Pine Tree State, embodying its fierce independence and its historic ties to the sea. The figure is a combination of physical power and well-seasoned finesse.  His strength towers not above but among us.  The sculpture is a standout work – handsome and well composed.  Moreover, the subject perfectly underscores Portland’s role as Maine’s leading city and helps this well-sited work deliver a fantastic sense of place.

Art in Our Front Yard The Maine Lobsterman from Portland Public Art Committee on Vimeo. 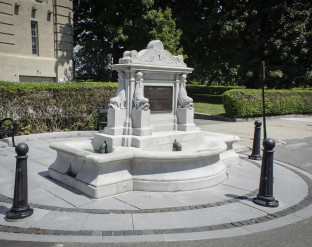 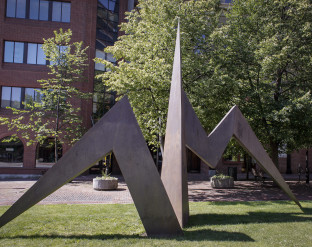