What if…when someone walked down the street in Portland, they could encounter the stories that make this place so well loved? Portland Brick aims to highlight what is significant about Portland through the stories happening here. It aims to celebrate the layers of local culture by combining the past, present, and future memories of the city.

Portland Brick is a multifaceted public art project that marries together community, function, and history through technology, live performance, and the fabrication of bricks.

Story #1: All of these spots are on Wabanaki Land.

Story #2: On this spot every year Ghassan Hassoon celebrates becoming a U.S. citizen.

Story #3: On this spot in 1898 The Abyssinian Meeting House tragically lost a third of its members in a shipwreck.

Story #4: On this spot in 1680, India Street became one of Portland’s first streets.

Story #6: On this spot in 1932, the Ringling Brothers marched their elephants up India St.

Story #8: On this spot in 2014 Eden wondered if adolescence ever ends.

Story #9: On this spot every Christmas Micucci’s is packed with friends and family.

Story #10: On this spot in 1872, the first Jewish wedding in Portland took place.

Story #13: On this spot Chad Conley celebrated his 21st birthday.

Story #14: On this spot in 1898 Jun Sing operated one of the first Chinese Laundries.

Story #15: On this spot every day more people than you know get sober.

Story #16: On this spot in 1911 mothers could pick up fresh milk for their babies.

Story #20: On this spot in 1956, Priscilla and Loretta’s shoes could be heard click clacking on their way to church.

Story #21: On this spot in 1866, William Wilberforce Ruby threw wet blankets on the roof saving the Abyssinian from burning.

Story #22: On this spot Tony played his first game of craps. He was twelve years old.

Story #24: On this spot in 1988, Jay and George York inspired the replanting of the neighborhood.

Story #26: On this spot every day, harm reduction saves lives.

Story #27: On this spot in 2011, The Free Clinic fought to remain open and continues to go strong today.

Story #29: On this spot in 2004, Rabbi Harry Sky brought Jews Without Borders to Congregation Etz Chaim.

Portland Brick aims to highlight what is significant about Portland by personalizing the streets. It is an every person’s history, present, and future of Portland and one that is an inclusive alternative to singular monuments dedicated to the famous of Portland.

Historical facts, personal memories, and future wishes connected to the India Street neighborhood have been collected. With the exception of our first brick which honors the Wabanaki People, each story begins with the phrase “On this spot…” and conforms to the character limit of a tweet. These facts, memories, and wishes have been stamped into handmade bricks that have been installed at the thirty locations where they took place. By layering the past, present, and future we hope that residents and visitors will better understand what makes this neighborhood so special.

Portland Brick connects residents and tourists to an online map of the brick locations. Each location links to a longer audio version of the story. In this way residents and visitors alike, may take an audio tour of the neighborhood through the lens of personal narrative. Think of a museum audio tour but outside and less boring.

Ayumi Horie is a full-time studio potter in Portland, Maine. She is recognized in the field of craft for championing the aesthetics of kawaii, for her online presence and videos, and her political activism. In 2020, she became an Honorary Member of NCECA for her contributions to the ceramics field. In 2015, she was awarded a Distinguished Fellow in Craft grant from United States Artists. She co-founded The Democratic Cup, a political project that seeks to catalyze conversation through collaborative cups made by almost fifty artists that feature icons like Ruth Bader Ginsburg and important issues like vaccinations and climate change. She is known for Pots In Action, a curatorial project on Instagram that featured international ceramics and guest hosts from all over the world. In 2016 she co-created Portland Brick, a collaborative public art project, that repaired city sidewalks with bricks made from local clay stamped with past, contemporary, and future memories in the India Street neighborhood in Portland. She has organized multiple online fundraisers including Obamaware in 2008 and Handmade For Japan in 2011, which has raised over $100,000 for disaster relief. She has served on multiple boards including that of the Archie Bray Foundation and the American Craft Council. She is currently Vice President of the Board of Trustees at Haystack Mountain School of Crafts. Her work can be seen at ayumihorie.com

Elise Pepple believes in the power of storytelling to shape and animate who we are, where we live, and how we relate. Elise has spent the last decade learning the contemporary branches of oral storytelling apparent to her: oral history, radio, live storytelling, social work, and social practice. In 2009, she initiated StoryCorps’ first recording series in rural Alaska.

She moved to Portland, Maine in 2013 to attend the Salt Institute for Documentary Study. That year she received a grant to coproduce The Other AK: an experiment in narrative tourism. She was selected as a 2014 Creative Community Fellow with National Art Strategies for her work using creativity to build community. Elise is the Public Engagement Coordinator at SPACE Gallery. She hosts a live storytelling series called Hear Tell, which collaborates with community entities to share under amplified stories of personal transformation. She has collaborated with The Abyssinian Meeting House, The Maine College of Art, The Portland Needle Exchange, Portland Outright, Marfa Public Radio, and The True False Film Festival. She teaches at The Maine College of Art and writes about creative placemaking. Elise collaborates with people, organizations, neighborhoods, and towns to celebrate their inherent creative placemaking.

A huge thank you to Maine College of Art and its students, Rochelle Garcia and Sam Richardson. Rochelle is a senior in Ceramics and the Public Engagement program and worked tirelessly on processing clay and making bricks. Sam, a senior in the New Media department, 3D printed and CNC milled the plates that we used to stamp phrases into clay. Thank you also to Molly Spadone and Janine Grant for helping make bricks and to Engine, a Fab Lab in Biddeford, for their help in printing plates. Research help from Julie Larry, Gabrielle Daniello, Libby Bischof, Daniel Minter, and the Chinese American Society of Maine. Thank you to Pilar Nadal for her effort in the project and great energy.

A very special thanks to the Portland Public Art Committee, the Maine Arts Commission, and the Kindling Fund for their support.

Lastly, the artists want to thank the entire India Street Neighborhood for their support and the opportunity to do this project in the place that they love. 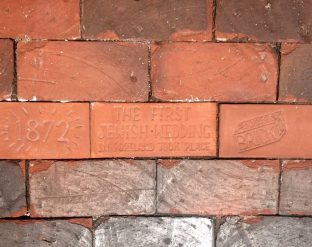 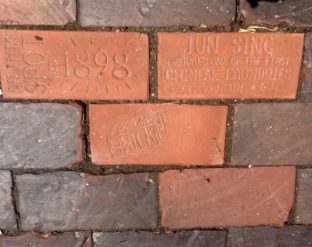 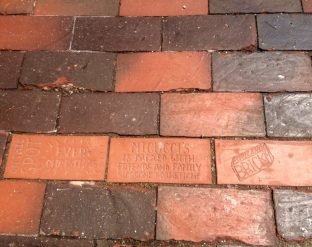